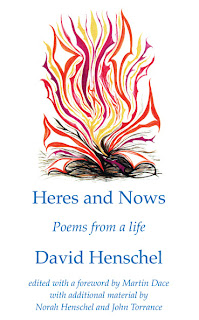 The title of this poem from David Henschel's Heres and Nows is taken from John Donne's No man is an Iland:

No man is an Iland, intire of it selfe; every man is a peece of the Continent, a part of the maine; if a Clod bee washed away by the Sea, Europe is the lesse, as well as if a Promontorie were, as well as if a Mannor of thy friends or of thine own were; any mans death diminishes me, because I am involved in Mankinde; And therefore never send to know for whom the bell tolls; It tolls for thee.

All who attempt to write, or to create anything, and write from the heart, make themselves vulnerable to those who will see only the flaws and miss the essence. For if something is created from the heart, no matter how clumsily, it will have value.

Go to another man and show him –
“This I've just written, tell me what you think.”
He'll say “Oh yes, how nice” and take the scrip
To use the eyes and hide the doubtful lip.

Why should he otherwise?
Whose many headed self preoccupies
His secret entrances,
Whose thoughts’ continual tide
I have attempted to divide
And march my feelings like an exiled band
Into communion’s promised land.

Promote Your Page Too